The UK's Times Newspaper cannot do without Trump…. though it’s not alone. - Another Devil's Advocate 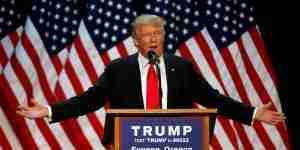 June 4, 2021
189
0 Comments
As we approach 20 weeks since Biden’s inauguration, it was expected that Trump’s presence would have died down, at least across the occasional day, or even perhaps a week. It would be even more expected if believing The Times, that he plays golf a good part of his current weeks. However, not a single day has passed, so far, without at least one article in The Times featuring him. In fact he has appeared in 7 separate articles in one single day, imagine that!
16

As we approach 20 weeks since Biden’s inauguration, it was expected that Trump’s presence would have died down, at least across the occasional day, or even perhaps a week.  It would be even more expected if believing the UK Times, that he plays golf a good part of his current weeks.  However, not a single day has passed, so far, without at least one article in The Times featuring him.  In fact he has appeared in 7 separate articles in one single day, imagine that!  He can appear in the most unexpected places, such as film reviews, with one critic believing Trump was worth a reference when reviewing a film on slavery!

Today was no exception, though I have to admit I thought for a moment it was in fact the first day without his occupancy.  He was not mentioned in the usual places, the ‘World’ section, nor from Gerard Baker, the US commentator, in the Friday ‘Comment’ section, as he covered travel under the pandemic.  So where did he show up?  Well, in ‘The Times Diary’ section of all places, in a report that the female Bishop of St. David’s tweeted more than he did, only to be ousted from Twitter too.  Their reason is that they “do not support intemperate claims or poorly informed commentary” ….. as she liked to lambast politicians, with a general opinion: “Never never never trust a Tory.”   Trump should offer her a round of golf to help overcome the potential ‘social media cold turkey’, and to have her buy into his soon to happen, alternative option to twitter.

You may ask: ‘why does The Times report so prevalently on Donald?’.  Well that is a very good question, though there isn’t a quick, one reason answer.  The most obvious and common reason is pure bias against him, to help maintain a heavily positive aura around Biden, despite Biden starting his tenure strongly left of centre, in fact mollycoddling with Bernie Saunders, the self proclaimed ‘democratic socialist’….. let’s just call it ‘left’.  Yes, you read it correctly, The Times newspaper, that usually sits squarely right of centre, or centre on occasions, now supporting policies not only over the fence, but in a field over several fences, somewhere in the far distance.   It seems obvious it is out of their sphere of influence as the bias narrative is poorly supported, as it’s difficult to support a lie, without more lies, even more so when it’s around a topic they don’t prefer to support.

The most blatant piece of bias that I can recall in any media outlet, is the use of a video link that has now appeared in The Times at least 3 times this year.  It is a negative report around Trump and linked to farmers losing their jobs.  Under the link is the comment:  ‘As he leaves office after four turbulent years the residents of Kenosha, Wisconsin are still counting the cost of Donald Trumps presidency’.  However, the link has nothing remotely to do with the article it appears with!  It’s very difficult to understand why a paper like The Times would resort to something so underhanded, with the obvious proof of heavy bias, if anyone needed any extra proof.  However, let’s use this as a blatant fact: The Times will plug Trump just to trash him.

As the Economist* rightly pointed out in a short piece a year ago, all major news outlets are now biased.  Any fact, if indeed the article has genuine facts, is distorted, and the ‘news’ to the reader becomes misleading, incomplete and often incorrect. A negative Trump comment, often very short, appear in many articles about Biden, presumably to help bolster a positive outlook on the relatively new president.  Rarely does Biden appear without a mention of Trump, though there are signs a Biden article can survive without him.

Returning to the topic of why else is Trump in The Times daily.  There is the obvious one of selling news, via paper editions or otherwise.  The comments section around Trump can attest to that, as ‘Trump-haters’ come out in force to remind everyone they hate him.  If they didn’t open the article, or comment, perhaps the readership would see less of Trump, something that makes it oddly ironic.  Throw them a few alternative remarks via the comments section, pointing out any part of Trumps success, is like throwing food to piranhas.  There is a frenzy of comments that follow, usually with a spate of vitriol and very little else.  As the article is biased in their favour, you would think they’d read it and remain content, believing what they wish.  There is no doubt about it, Trump remains highly topical and while he does it would be odd to leave him out if the goal is to make money selling what readers wish to read.

It’s also very obvious that Trump is not disappearing any time soon. He probably has more support in his own party now than he had as president. There isn’t anyone yet that looks remotely like replacing him, if he chooses to stand again.  So, for that very reason, Trump should remain topical, not daily topical, but some articles are genuinely newsworthy as he cannot be ignored.  The paper could jump on a wonderful volume of news that it doesn’t report around Trump, such as the real facts around 2020 voting audits, the terrible ways of voting that encourages fraud, the findings from two January 6th inquiries that have already taken place, or even comparing his success to Biden’s failure, as opposed to just the opposite. Having such a deep biased narrative rules out reporting on a a mass of information that is genuinely factual, to say nothing of what the currently misinformed readership is missing.

This would be a great opportunity to transgress into the real dangers of what ‘fake news’ does to the world in general, as many people do actually believe what they read in the paper (that phrase, ‘fake news’,  usually grabs the attention, as Trump would attest to).  However, Gerard Baker recently covered that topic well in the Wall Street Journal, entitled ‘Media Mistrust Won’t Inoculate You Against Misinformation’.  However, I will return to this another time, as the topic is large and serious enough to fill a book, not that I’m suggesting a book is on my ‘to do list’.

On the subject of ‘fake news’, Trump took the war to the media outlets, for good reason, and they have retaliated, as expected, and still haven’t stopped what is best described as ‘a vendetta’.  The only issue is they’ve lost credibility in accurate news reporting.  They can no longer claim to be ‘quality news outlets’ if they continue to repeat a false news narrative.   They obviously don’t know it but they have suffered because of their stand against Trump, then and now.  Niail Ferguson pointed out something similar in this very paper, ok the The Sunday Times, that the media have never grasped the concept that he is playing with them in order to remain in the news, whether it’s good or bad news.

I dare say that if the current president was a good deal stronger, not someone elected to act as a puppet to the party, a ‘yes’ person helping them see through their agenda across the time period available, including bolstering as many voters in the meantime to help extend that period, then there is a strong possibility the paper wouldn’t need to mention Trump.  That would apply especially to the ubiquitous use of Trump to elevate Biden. That may seem like a biased comment on my part, but I’m not the one including Trump in most conversations about Biden.  The weakness is evident by the way The Times uses Trump in such a context.  Obama didn’t remain a focal point after Trump took office, despite his 8 years in the Whitehouse.

Today’s edition coincided with possibly the first negative article against Biden without Trump as a reference.  It centred on Biden’s concern that the slim majority is disappearing with 2 democrats voting against him, especially Joe Manchin.  Maybe this is a turning point for The Times, as they will struggle if they hope to keep Biden in only positives, for another 3 plus years.  Maybe now we will read more of the negatives, such as the border disaster, and his ‘promises’ that didn’t make the budget.  Let’s be honest, The Times will feel a lot more content if it can cross back over the centrist line, as well as providing the reader with more palatable news without the need to be overly biased.  Unfortunately, it would be too much to expect the new outlet to switch to unbiased news.  Maybe one day in the distant future.

*The Economist would often seem one of the least biased of journals, along with the FT, however, it threw all caution to the wind as the 2020 election approached, and took a very heavy handed, biased approach, against Trump to support Biden. That was clearly evident in their magazine lead ‘Bidenomics’, when they ‘featured’ Trump for a 1/3 of it, before finally broaching Biden.

LinkedIn Blocks Some China Critics on Eve of Tiananmen Anniversary,...