Biden’s Desire to do the Opposite of Trump on Everything is One Cause of his Mistakes. 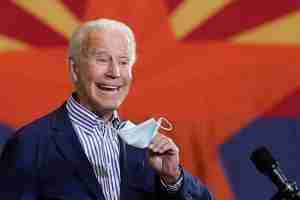 The decision to investigate the Chinese Lab for the origins of Covid was killed when Biden took office. Despite professing to have a team of scientists to reply on.  That has since changed to a ‘redouble efforts’ to find out whether the lab is linked to the pandemic origin.   Biden’s admin. won’t take a scientific approach as they are too invested in ‘politically convenient’.

The same admin. that  have refused to give any credit for the ‘warp speed’ development of Covid-19 vaccines in record time. Unbeknown to many people, due to media bias, is the fact it was being dispensed at a rate of 911,000 a day on the 19th of January, the day before Biden took office.  That level was climbing at a rate of 62,000 a day, and was on track for 2 million a day by the end of February, however the rate of daily vaccinations dropped under Biden.  In essence Trump has saved millions of lives, though the spin is the exact opposite.

Biden’s $1.9 trillion was used as an excuse to jump start the economy, when evidence indicates clearly it didn’t need such a huge stimulus.

So now we have an about turn by Biden on the origin of Covid-19.  As the WSJ pointed out that ‘the suspicious facts have been apparent from the start’.  It doesn’t take a genius to link the proximity of the ‘Ground Zero’ seafood market, and the close proximity of the lab., that was investigating the virus. If anyone wanted additional suspicion look no further than the fact China have remained uncooperative from day one, remaining so today.

Finally Biden has come out of the closet and his team have admitted an investigation is long overdue. Not because of science, but because Trump’s suspicions were correct in the first place.   It’s best not to take the science route, as Fauci has flip-flopped too.

Biden is probably one of the only people pleased with the pandemic, as he used Covid for political means, including the deaths, to reassure people it wont happen under his watch. Ironically he has Trump to thank as it was his actions than enabled the deaths to fall as rapidly as they had arrived.  Following Trump on other issues would have saved him digging a hole he finds himself struggling to get out of, the southern border being the most obvious. He is very fortunate to have the bulk of the media still remaining positive, but continuing to bash Trump daily, just for the sake of it, is starting to wear thin if they want to remain credible.  More and more outlets are picking up on that fact as a newsworthy story.

A Future of Secular Stagnation